As the sheeps milk decreases and due to a phone conversation Martin had with Randolph, we have been looking at temperatures of our make recently.  Out at Randolph’s country residence Old Kate’s Farm, Dr Jemima Cordle has been conducting cheesemaking experiments.  According to Martin, she’s been making cheese to roughly a St James recipe but playing with different temperatures and amounts of rennet to see what gets the best results in terms of producing heavier cheeses and a greater yield of cheese.  Obviously as we have less milk, that’s quite an attractive idea to us too.Perhaps a little ambitiously we thought we’d try dropping the temperatures slightly before we had a truly accurate way of recording the temperature.  The floating thermometer we have been using is about 9 degrees out.  The recipe for St James calls for setting the milk at 31C and by the thermometer we had been using, we were setting it at 23C.  You’d think that knowing this, we could drop to setting at what the thermometer tells us is 22C and try experimenting.  However, as it turns out, the thermometer is inconsistently inaccurate – great.  The first 2 days experiments have had to be discounted due to too much yeast in the starter which lead to gassy cheeses.  Dropping the temperature just a little slowed down the drainage and allowed them to take advantage of the extra moisture and get going far more than we wanted.  Experiment abandoned we invested in a good digital thermometer and realised that our previous 23C was in fact about 33C by the new equipment standards.

The temptation at this point would be to return to 31C set straight away, but by setting at 33C we had actually been getting a set time of about an hour and sometimes longer (which is not too short a time for this recipe) and more importantly the cheese has been good.  The NYD mongers have been reporting good things and the cheeses on Martin’s counter at Cartmel have also been tasting good.  So while that’s hotter than we’d intended, if it ain’t broke don’t try and fix it all at once.  We agreed to drop to 32C set temperature for starters and gradually reduce it from there on.

The temperature and set time that Jemima had found to yield most cheese is 28C and a set of an hour and a half which is longer than we have yet achieved.  By setting at what is probably 33C (it was with the old thermometer) and using half the usual quantities of rennet by mistake (1ml to every 10 litres rather than to every 5 litres) I did manage to get a set of an hour and a half.  The curd did set and it was a nice consistency at both cutting and ladling but the texture of the cheese is quite different to the usual St James.  It’s moist and succulent but sandy in texture.  In fact it reminds me of young Stichelton which considering that that is a cheese made with very small quantities of rennet is perhaps not entirely surprising.  However until it matures, we can’t be sure if dropping the rennet quite that drastically is a good thing or not.  Sometimes by making mistakes, you stumble on something good.  Sometimes, you don’t.

However armed with new thermometer in hand, I have been dropping the temperature a little by degrees.  For a few days I was renneting at between 32 & 33C (we can measure in decimal points now) and in the past couple of days I’ve dropped it further to between 31 and 32C.  Martin remains nervous about gassy cheeses, but by adapting the draining cloth work, I think we’re avoiding them.  In fact even the yeasty cheeses we made about  a fortnight ago haven’t remained gassy although they haven’t drained as I’d like either.  But they’ll be ok – not amazing but ok and for a while we weren’t sure that would be the case.  As far as set time goes, the magic hour and a half has eluded me so far but the set is a little over an hour – generally about an hour and a quarter.

The effect of dropping the temperature on the draining was the biggest difference I noticed.  It’s manageable but the curd drains less freely.  This really should be expected.  As I understand it, the reason for this slower and longer set is that rather than forming a number of stronger bonds as the curd solidifies, it forms perhaps weaker bonds but more of them and this at the end of the day forms a more effective net in which to trap moisture and fats so that the curd releases less whey when it is cut and left to rest and it needs more encouragement to continue draining after ladling.  The texture at cutting and ladling is less firm and it actually feels really nice to work with – more like gliding a knife through it than making the effort to cut.  After the curd is in its moulds however this means that it’s delicate and you can’t pull the cloths up as tightly as quickly.  So the cloths are pulled up and tucked in gently after ladling is finished.  The second cloth pull is 20 minutes later and whereas since then we’d been waiting for an hour to do it again, I now find that it needs looking at anywhere from half an hour to 40 minutes later instead.  At this point the curd is getting firmer and can stand a tighter cloth pull in which I aim to have pulled the curd in from the side of the mould so that it doesn’t touch the sides of the mould all the way round.  I won’t neccessarily have it pulled in so that it stands alone all the way round but certainly on some sides or corners it will.  The final cloth pull is then an hour after this and again can be pulled up quite firmly with the aim of standing alone from the sides of the mould as much as possible.  I usually have some cleaning or cheese turning to do after that and I’ve been keeping in mind the idea of a 4th cloth pull but so far by the time I get to cloth pull 3 I feel it’s probably drained enough.  The following morning, in general, the cheeses feel firm and well drained, perhaps a little softer than those made at the higher temperatures but no squelching that indicates free moisture.

In terms of yield and weight and whether we are getting more cheese as a result, my gut feeling is that we are.  Certainly in the last couple of days when I dropped down to between 31 & 32C, I seem to be getting more cheese than I’d expect.  I am not sure about what they weigh, but they seem to be perfectly reasonable sized cheeses and as they are well drained, it’s not trapped whey making them that size.  What I have noticed is that where I’d expect to get 11 cheeses by a process of calculation alone, I get 12 and where I thought I would get 10, I got 11.  In part this can be explained by the composition of the milk – it has higher solids in the latter half of the season than at the beginning but my gut feeling is that it is helped by the temperature and length of set too.

Certainly at this stage of the season when we’re very nearly down to 1 vat of milk only, every little extra is going to help.  The downside is that the longer set and lower temperatures can favour things like yeasts if the drainage doesn’t work so getting those cloths attended to turns out to be pretty vital. 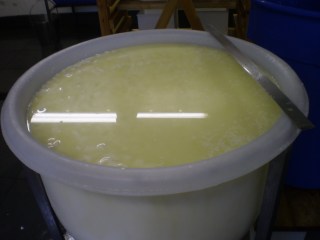 Resting curd just before ladling.  This is the stage at which less moisture releases naturally at the lower temperatures and so more attention is needed to the cloth stages later.