It was thanks to the Cavuto sisters on their bread-making visit that we made pasta.  They had come over, equipped with 00 flour for the dough and semola flour for kneading and knocking back.  They had been a little over generous with the amount they brought and when the bread was finished and proving,
Paola looked at the semola and said
‘Shall we make pasta?  I’ll just throw this flour away otherwise’
I didn’t need asking twice.  Oh yes we shall. 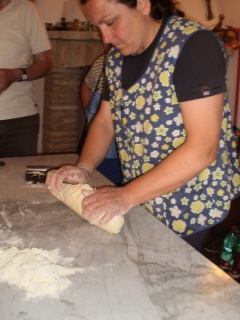 The type of pasta she intended to make is what they call pasta corta (literally short pasta) locally and it’s made without egg.  It’s eaten in a soup-like sauce made of tomatoes, onions, carrot, a sprig or 2 of parsley and borlotti beans.  You can also add a little chilli if you like.  In terms of ingredients, it’s very similar to the pasta dough that makes orechiette but it’s rolled out thinner and is less dumpling-like when cooked.
The semola was tipped out onto the marble table top.  Apparently marble is the best surface for making, mixing and kneading dough which in Italian is succinctly referred to as ‘impastire’.  A well was formed in the centre, water added and mixed in and salt added to the mix.  Once formed, the dough was kneaded to a silky consistency but compared to bread kneading, it was minimal. Then it was ready to be rolled out.
If you are Italian, you will have a long thin rolling pin with no handles because this dough rolls out to quite a large area.  We, however, are not Italian and we had my great aunt’s old rolling pin that my mum had inherited and about 40 years ago, brought out to equip our house in Italy.  The dough was then cut in half to be rolled out and when it was at the right thickness, it was cut into long strips about 4cm wide.  These strips were then dusted with semola, piled up on top of each other 3 at a time and then cut into little strips.  The strips were then separated and put onto a tray that again had been dusted with semola.  More semola was then applied on top to keep them from sticking to each other and to the next layer that would soon be covering them. 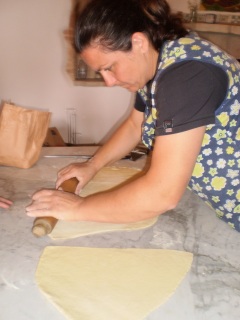 Meanwhile the sauce was prepared and the water went on to boil.  Onion, carrot and a sprig or 2 of parsley were sweated in olive oil.  Tomato passata was added.  The borlotti beans were drained and rinsed and added.  We had bottled beans of course but if you were properly traditional, you would have soaked them up the night before and already boiled them for 3 hours before draining and adding to the tomatoes and soffrito.  This all cooked away (seasoned of course with salt and black pepper, we omitted the chilli this time due to my extremely chilli sensitive mother) for about 20 minutes while the salted water boiled for the pasta and it was cast in to cook.  Pasta cooking took a couple of minutes at most and it was then drained but the salted water was reserved.  Sauce was added to the pasta and a ladle full of the pasta water too.
Our timing wasn’t entirely right as it was about half an hour until lunchtime but my mother started to rally the troops anyway thinking that as the pasta was dressed it must be eaten straight away.  Apparently not.
‘Just keep adding some of the pasta water when it dries out’ we were assured and it worked too.  However they did add a condition not to wait too long before eating as obviously it was at its best when freshly done.
This only dealt with half the pasta Paola had made though.  The other half was cooked up a day later, following another recipe they use locally as well.  Strictly speaking it’s a winter recipe but hey we were experimenting.  It is a similar principle to the borlotti beans (Sagne e Faciul in the local dialect) but uses chickpeas and as it has no tomatoes is described as being ‘in bianco’.  Equally good, I have to say.  Happy days.