Before I got embroiled in the vegan debate, I was recounting a visit to Neal’s Yard Creamery.  It’s time to return to June and Herefordshire and in this post, lactic set goats milk cheeses.
Day 1 at Neal’s Yard Creamery and, bright and early, I headed into the dairy.  Charlie starts the day checking over the previous days cheeses and doing odd jobs: checking the acidity of the renneted buckets of curd from yesterday and ascertaining when to cut or ladle them, casting an experienced eye over already draining cheeses and levelling out where necessary.  I gave him a quarter of an hour to get going without someone asking a million questions (‘but why are you doing that? Where’s the such and such… ‘ etc) and then headed in.  Charlie was at work checking pH and ladling an experiment cheese he’s playing with.  Shortly afterwards, the next shift started and with the arrival of Ellen and (a little later) Haydn, ladling began in earnest.
All of Neal’s Yard Creamery’s goats cheeses are what’s called lactic cheeses.  This means that they acidify slowly and over a long period of time but ultimately to a high level.  On Monday morning, the cheeses to be ladled were Dorstone, the milk for which had been collected the day before.  Haydn had been in the dairy, added starter, left the milk to acidify and then at the magic pH point ( I could tell you but I’d have to kill you) had added rennet and left the buckets of curd overnight to set and continue acidification.  The following morning we were ready to ladle.
Dorstone curd is pre-drained, which means that before it makes it into the actual moulds that will give it shape, some of the moisture is removed by draining the whole lot of it first.  This used to be done in giant sacks that look for all the world like big curdy pillowcases and this is still done for Neal’s Yard Creamery’s goats curd but Haydn is experimenting when it comes to drainage and the Dorstone.  The drainage table was lined with plastic matting, curd ladled out onto and initial drainage commenced.  A few hours later, the drained curd will have salt mixed into it and will be transferred into cheese moulds which will then be turned out the following morning. 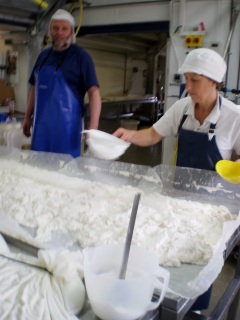 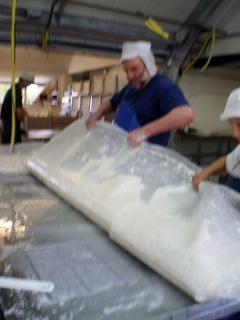 Meanwhile, in a corner of the room, Perroche curd was also being ladled.  Perroche curd is unusual for a lactic cheese because it is cut.  It’s very gently cut and in large squares but a few cuts are made and help get the moisture out.  These cheeses are only ever destined to remain fresh and rindless or in the case of the herb perroche, dusted with chopped dill, tarragon or rosemary.  Simple, but oh how effective.  My particular favourite, since you asked, is dill.  Sadly (for me) the sales on Perroche were good this week and there were none left after orders had been packed.  This meant none for me to buy.  Not in fact that I was allowed to buy any of the cheese I took home in the end, but I did try!

Mid-morning, Tim arrived with a fresh lot of goats milk, which was duly given a dose of starter and destined to be ladled out as Ragstones or Perroche logs the following day.  Meanwhile, Haydn was busy preparing more starter for the rest of the week and heating up cream for the crème fraiche (but more of that anon).  It is genuinely a hive of activity at Neal’s Yard Creamery but one in which each person has their own area and responsibilities and works efficiently away at them.  While all the cheese was being looked after and the crème fraiche being prepared, in a quiet, out of the way corner, Strained Greek Yoghurt was being poured into pots and maturing cheeses from the cold rooms were being turned.
The Ragstone milk is given its dose of starter as the Dorstone milk was.  In the afternoon, rennet’s added and the following morning it is time for acidity checking and ladling and so the routine continues.  Later in the week it’s the turn of cows milk, Neal’s Yard Creamery’s lactic double cream Finn and their Greek Style Yoghurt.  But that, is a tale for another day. 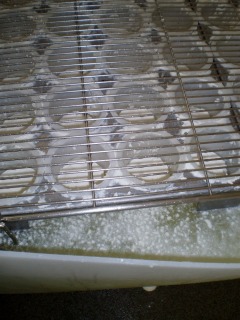