I may be biased, but I have to hold my hands up and say that I think that the Crème Fraiche from Neal’s Yard Creamery is the best I have ever tasted.  Since leaving London it’s been missing from my life and I had just about kidded myself that I didn’t miss it all that much, until I tried some again and all pretence was gone.  Damn that stuff is good.  I could sit down with a great big pot and a great big spoon and be one very happy girl.  It does everything a crème fraiche should: accompanies a chocolate tart or apple pie, gives a silky, lovely texture to everything cooked with it but equally, you could just sit down and stuff your face with the hard stuff and revel in its light, lactic, buttery flavour that steers just onto the clean side of richness.  I am equally enthusiastic about their yoghurts.  There’s a joy-enducing layer of cream on top and the flavour is so much richer and more complex than the standard, straight-down-the-line acidity of most yoghurts, with an almost salty, savoury edge. 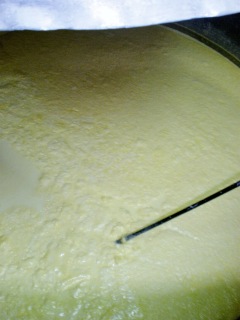 Suffice to say it wasn’t just the cheese that interested me on this trip to Neal’s Yard Creamery.  I have an interest in yoghurt making and the idea of making my own crème fraiche in my own dairy at some future point is definitely something I like the sound of.
Monday is crème fraiche day at Neal’s Yard Creamery and Thursday is yoghurt day.  Both follow a similar routine as the milk and cream are both heated first before cooling to the appropriate temperature for the starter to be added.   This helps actually form a firmer set.  In an amateur way, at home, I have played around with various ways of making yoghurt using both Jersey milk from Ivy House Farm (back when I was in London), milk from the local supermarket (not really recommended) and finally sheeps milk from Martin & Nicola’s in Cumbria.  I tried it heated first and then cooled and I tried it just incubated from room temperature and can report back that it is indeed true; you get a better set if you heat the milk first.  While a loosely set, very delicate yoghurt is actually quite fun to eat, it’s no good commercially if the yoghurt has to travel any further than from the fridge to kitchen counter.  Same goes for crème fraiche.  So, both are effectively pasteurised and then cooled down to the appropriate starter temperature.  In the case of the Crème Fraiche which is made using a mesophilic starter (the much revered MT36) this temperature is around 26C while the Greek Yoghurt starter, being thermophilic, needs to only cool to a temperature somewhere in the low 40s C.  The cultures added and left to disperse and begin to incubate for a little while, it is then time for pouring. 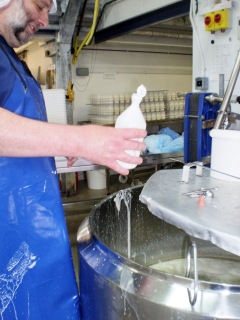 Pouring is an exercise in itself when you make as much of both yoghurt and crème fraiche as Neal’s Yard Creamery do.  A pallet is wheeled in, stacked high with cardboard trays each containing either 340g pots (12oz as it used to be when they started out) or 116g pots (4oz).  All of these need to be filled and no spillage is allowed as the trays then become greasy and messy and any spare crème fraiche or yoghurt coagulates on lids or bottoms of pots and creates a display nightmare for any retailer that is buying them.  Each of these in turn needs the lids snapped on and it has to be done in a particular way so that they don’t bulge and look blown. 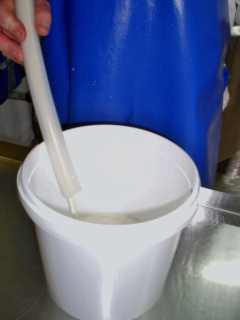 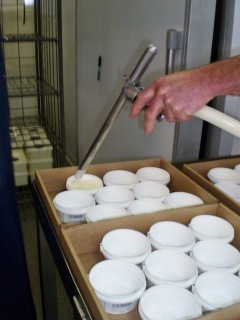 Then, after the fiddly work, it’s time to fill the catering sizes: 2.5lt tubs, 5lt buckets and even 25lt buckets.  All of these, once filled, are transferred to trolleys and wheeled away to spend 24hours in an insulated room designed to keep them at just the right temperature to get them to set.  The following day they are refrigerated and from then on are ready for sale.
Pouring fiddliness aside, the actual process is quite simple; it’s choosing your ingredients with extreme care and then handling them with respect that makes for such good yoghurts and crème fraiche.
The organic double cream used for the crème fraiche is delicious and is handled carefully to make sure the fats are kept as intact as possible.
The milk used for the yoghurt is the same milk as is used for their Finn and cows curd cheeses and is already chosen carefully because of its fats, proteins and the care the farmers take over their animals.
Both are heated gently and slowly in a vat rather than being pumped aggressively through a pasteuriser and heated at speed. 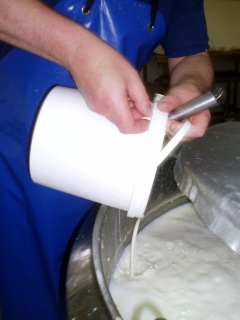 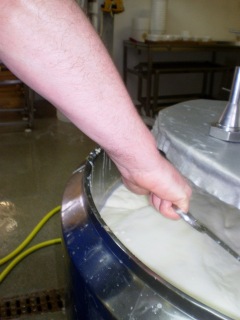 Finally the cultures are tried and tested.
They use the same yoghurt culture as was used all those years ago when Neal’s Yard Creamery and Neal’s Yard Dairy were one and the same.  Experience has taught Charlie and Haydn that it works best if they make up a strong bucket of the starter and leave it for a week to culture and incubate, then add it the following week.  Keeping a rolling mother culture going, always using one bucket of last week’s yoghurt, lead to the more complex flavour gradually diminishing to a straight forward acidity.
And what more can be said about MT36 (their creme fraiche starter) except it just delivers.  Used now by Graham Kirkham (Kirkham’s Lancashire), the Trethowan family (Gorwydd Caerphilly), Joe Schneider (Stichelton) and Martin Gott (St James & Brother David), it delivers rich but lactic flavours in whatever it is used for.