At the beginning of August, I finally moved to Nettlebed. At the time, it seemed that we’d have 6 weeks of build left and at the beginning of October we’d be making cheese. Then it moved to mid October and now it looks a bit longer than that too. Building projects huh?

We have internal walls now which is very satisfying to see the building really take shape. From what will be our make room, I can look down the building through what will become the salting and hastening room, warm aging room, cold aging room and ginormous cold room. I can walk through our entrance way and hygiene barrier system and be satisfied that it works. There are scribblings all over the walls showing where the power points are going to be and where our wash down points and hand wash stations are going to be.

We have drains in place and like the big geek I am, I am so happy with them. We have lovely stainless steel trench drains which are going to be so blissfully easy to clean. There are 2 different types of concrete on the floor: regular concrete and a different mix with a higher sand content that Lee, the man who laid the floor at Trethowans’ Dairy had to specify and order in especially. It was laid down beautifully with the right rises and falls etc and then John Lord who will lay the final resin layer of flooring came to do their work. Unfortunately at this point, things slowed. John Lord were concerned the concrete hadn’t set hard enough and queried if the correct mix had been delivered.  Since then many opinions have been given from other flooring firms and concrete suppliers, hammer tests have been done several times and unfortunately our worst fears were confirmed.  It wasn’t good enough and needed to be done again.

Meanwhile, Alan Hayes has been shifting the schedule around in order to do as much as possible while we wait for the floor and so the delay can be as minimal as possible. We have electrics going in next week, a phone line and broadband as well. Given that we can’t finish the downstairs until we have a floor, we’ve put more attention on the mezzanine floor, designing an open plan office space but also working out how our changing room plus shower block will work and where our hygiene barrier fits in. We also have a nice big space at the back of the building where we’ll have storage space for filing but also a space for cheese tastings with our customers but also possibly if there’s interest locally, at some point in the future, tastings for the general public.

And I have been practising cheesemaking in the kitchen as my Facebook friends can attest. I’ve also found the enforced wait to be quite useful getting to understand the pace of our starter cultures. We’ve bought cultures from Standa in Normandy on the advice of Ivan Larcher and after much deliberation, we’ve bought 2 different yoghurt cultures and a mesophilic culture which are supplied as freeze dried powder but that we need to bulk as a levain culture before use. One of the yoghurt cultures acidifies a lot quicker than the other, making it quite nice and easy to use but actually the slower culture tastes nicer. Today I have been making cheese in the kitchen again and having made up starter cultures a couple of days ago, I have left the yoghurt cultures straining in cheese cloth. I intend to have them for breakfast tomorrow. I’ll report back. There’s more to be said on the subject of kitchen cheesemaking than one paragraph in a general update post. That’s a topic for next time.

Like Loading...
About a week after joining the Farinas and Palladinis for their olive harvest, it was finally time to pick the olives on the trees in our back garden, mix them in with those of Carlo & Rita (she of amazing sott’olio pickles).  A friend, Americo Colantuono, lent us the mats and a couple of combs and came over to get us started.  Although we didn’t have motorised combs, it was relatively quick work to pick the olives on the furthest tree with an experienced pro giving us a hand.  We moved on to the remaining trees ourselves and while doing so discovered the importance of pruning. 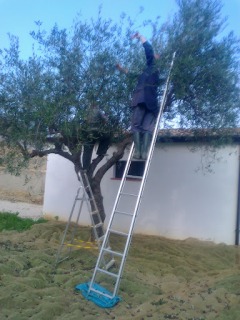 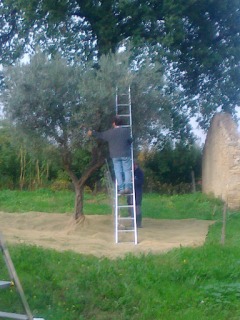 These trees had been neglected for quite a few years and pruned perhaps a couple of years ago.  Before that, they’d been left for quite a few years as we weren’t harvesting them and none of our neighbours was interested in doing so either.  As a result, although they’d been spurred on to more fruiting by the bit of pruning they’d had, they weren’t exactly trained.  Anyone who has picked fruit will know what I mean; by pruning you make sure there are a few branches that are bursting with fruit so the job of picking is straightforward and efficient.  If you don’t prune an apple tree, given that the fruit are relatively big, it’s not so bad trying to hop around the tree and pick them individually.  For something like cherries, or indeed olives, it makes a much bigger difference as you pick one or two olives per branch and the novelty of picking olives in the autumn sunshine, starts to pall.  Using the combs becomes barely worthwhile because you’re pulling down as much in twigs and leaves as you are olives so it makes more sense to pick them by hand which is pretty slow work.  This brought out different approaches in the family group; my father became just a tad obsessive (perhaps not a huge surprise to those of you that know him), staying up the ladder and picking individual olives way past sunset when it was so dark you could barely distinguish olive from leaf.  I got bored of hand picking and started some early pruning to cut out the excessive branches from the middle and open it up.
Rocco Palladini had explained to us about pruning when we joined them for the day – his family’s trees are pruned into a wine glass shape with space in the centre for the light to get into the tree and keep it alive and vibrant and with a few branches that descend waterfall style from the edges which can be combed easily and yield bounteous amounts of olives.  The added bonus of opening up the middle as well is that there is somewhere to rest your ladder for those of you without the motorised combs.  However, by slightly after nightfall, the harvest was done, several washing basins filled with olives and the bigger twigs were picked out so that they could be driven to Carlo & Rita’s to be included with their olives and sorted then pressed.
Sorting turned out to be done in a very simple manner, the olives were consolidated into a trailer, lifted out and put onto a grid sloping down an incline. 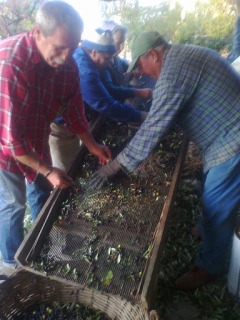 By the nature of their different weights, the olives fall down where the leaves can either fall through the grid or be brushed out and to the side and blow away.  Again this is a family activity, all hands to the pump and carried out with company and chatter.  Sorted (all but a few remaining leaves that is) and finally put into sacks, it’s time to go to the Frantoio.

The Frantoio itself is down a little side street in Tollo.  Most of the year, you would never know it was there and would just think it was an agricultural building of sorts.  When it’s open though, it’s a fascinating glimpse into a way of producing oil that has changed very very little since the time of the Romans, I suspect.  The olives are offloaded and weighed and then crushed into a paste by rotating stone millwheels.  These are powered by a motor now but in the past would have been horse or more likely donkey or oxen powered.  In fact in the cellars of our house there is still the olive press that the farmers who lived there used to use, which was driven either by an ox or donkey.  More recently they converted it to a wine press but that’s another story. 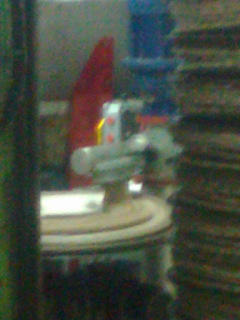 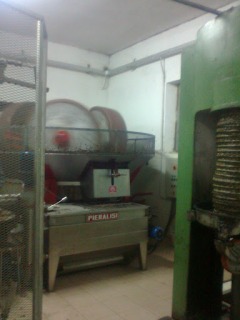 Returning to the Frantoio; the paste is spread between mats which are stacked up onto trolleys with a column in the middle to keep them in place.  Every 4 or so mats there is a metal disc that stabilises the whole stack.  Once full, the stacks are taken to the hydraulic press and pressure is put onto them from the bottom up and a mixture of olive oil and olive juice streams out and is collected in a pit below. 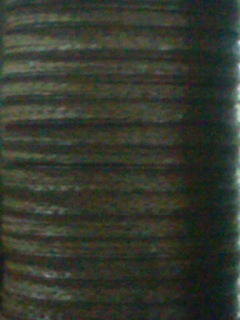 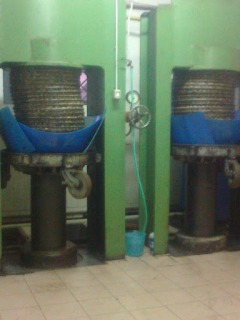 The oil, of course, floats to the top of this and in some cases this is lifted from the top of the liquid without putting it through any centrifugal separator and sold as the ‘flower of the oil’.  In this case, however, the oil and some of the liquid was sucked up and put through the centrifuge, emerging as a trickle of emerald green oil.  It seems quite magical when you watch it, to see these purple or black olives go in and this bright, fresh green oil emerge at the other end. 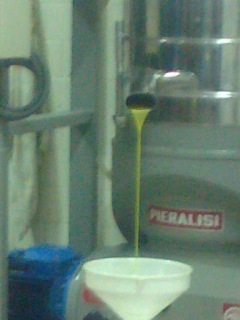 So how much did we get in oil from our trees?  Well since you ask, a rather majestic 13 litres.  Score.