‘A Cheese Grating Course?’ asked more than one of my non cheese friends when I told them I was going to learn more about cheese grading.

‘No, GRADING,’ I replied, realising again that I have indeed entered the realms of cheese nerdery that doesn’t quite translate to the outside world. ‘That’s the process by which cheeses are evaluated either during maturation in order to determine which market they should be sold into (retailers, wholesalers, exporters) or also during judging at a cheese show.  You assess the cheese for texture, body and flavour and note down your observations for review later.’

‘You eat cheese all day?  Wow, my kind of course.’

Not exactly, but I must say it was a very pleasant way to spend the day and yes, cheese was consumed…in the interests of education you understand.

About a fortnight ago at the beginning of February, Julie Cheney hosted a day’s course in her house on the subject of Cheese Grading.  The course was being taught by Jayne Hickinbotham of Dee Dairy Services who is one of the UK cheese industry’s unsung heros.  After years in manufacturing with big creameries like Dairycrest, she went freelance and now operates as a consultant who can pretty much do anything from calibrate your thermometers to write your HACCP to train your staff in Dairy Hygiene to help you write up risk analysis justifying the more traditional of cheese techniques like use of raw milk and use of wood in maturation rooms.  She is also a trained RPA auditor and Cheese and Butter grader and until she stood down from it, was the Chief Steward responsible for the Cheese and Dairy Show at the Great Yorkshire Show.  As if that wasn’t enough, she co-wrote the Specialist Cheesemakers Section of the SALSA + SCA standard and is one of their Dairy mentors and auditors as well as sitting on the SCA’s Technical Committee.  She knows her stuff.

The course, which, to give it it’s proper name was ‘Sensory Analysis (Grading and Selecting) and Managing Variation of Hard, Soft & Blue Cheese’ was attended by a very interesting bunch of people.  Again, we left a cheese function with Rose remarking, ‘Cheese people are all so lovely!’

Our fellow learners were Julie herself, Paul Thomas of Thimble Cheesemakers, Ned Palmer (my ex colleague from NYD days and now a freelancer himself), David Jowett, Francis & his wife from Taste of the Vine who are thinking of taking up cheesemaking, Robbyn Linden from The Cheeseboard in Greenwich, Patricia Michelson and Sofia from La Fromagerie, Jonny Crickmore of Fen Farm Dairy, a couple from Lyburn Cheesemakers whose names I never got (sorry) and a Neal’s Yard Dairy triumvirate of Adam Verlander, Terry Warner and David Holton.  I hope that was everyone!  It was certainly all quite cosy in Julie’s sitting room.

Jayne began by explaining the purpose of grading and how it was different from tasting as a sales tool.  This is a topic that I know she feels strongly about from her experiences as judge.  If you are tasting as a sales tool, it’s ok to think ‘I don’t like that,’ or ‘I really like that’.  If you are grading, subjective descriptions like that only lead to arguments and get you nowhere.  Grading needs objective and descriptive records.

A sales taster would be more likely to communicate: ‘Don’t like that much, metallic, acidic and sour.’

You can’t really argue with the objective description.  It is what it is.  You can however argue with the subjective one and by being subjective it’s more likely to put the manufacturer on the defensive into the bargain.

‘What do you mean you don’t like it?  I don’t think it tastes at all metallic.’  And so on.

An interesting point too was that Jayne even refined it down to the choice of vocabulary.  ‘Astringent’ for instance we discovered was something that some of us identified as bitter and others as tannic.  That means it’s not clear or objective enough for grading.

Remaining with vocabulary, we discussed the difference between ‘body’ and ‘texture’; body being mass, solidity, density and something you can touch while texture is formation of structure and is visible.  We talked about use of certain words and their associations during grading.  You don’t use the word ‘sweetness’ as a positive descriptor with cheese.  It describes a fault relating to whey retention or adding potassium sorbate as a mould inhibitor (in industrial block cheeses).

We covered analysis procedures and hygiene – including personal hygiene.  You can’t accurately judge flavours in the presence of strong perfumes and you particularly can’t if you’ve just used very perfumed handsoap.  This latter is especially relevant to hard cheeses where you don’t just taste the cheese but also hold the sample between your fingers and knead it to assess the texture.  Then you taste it.

Jayne even warned us about the planning a professional grader puts into their packed lunch.  She once suffered by having packed an orange to eat and realised only afterwards that the smell of orange oil on her hands which persisted after handwashing was distracting her from the product she was grading.  Several further washes of the hands in neutral soap were required.

It wasn’t all theory though, we also had the milk drinking challenge.  Six different milks were poured out and handed out in a blind tasting.

First was the control: standard full fat milk from the supermarket.  It was, white and uniform in appearance with a buttery and slightly animal aroma, tasted slightly metallic but with a caramel note and was relatively weak in body.  Jayne pointed out that it left a slightly drying sensation in the mouth.  This, she explained, is very common in all milk sold in our supermarkets nowadays.  The milk itself will have been collected from the farms and then moved to the processing plant.  It will have been pumped at milking, then pumped again to fill the milk tanker, then pumped a further time to empty it into the silos at the processing plant.  The time frame for this can be 3 days before it is pumped through a pasteuriser and then homogenised.  During this time and especially with all the pumping going on, the fat particles in the milk are damaged, oxygenised and this drying mouthfeel is the very beginnings of what would become rancidity if it were butter.  It won’t get that far as milk because there’s relatively little fat and in any case it won’t be kept that long.  This is one of the reasons that organic unhomogenised milk tastes better.

Our second sample was slightly pinky off-white and smelled distinctly caramelised.  It had flavours of coconut, malt and caramel but was also more strongly metallic.  The mouthfeel was most definitely drying, more so than our control sample.  It was more viscous in the mouth as well.  This, we discovered was UHT.  The caramel flavours coming about because the milk is heated to 135C in which process the milk sugars, not surprisingly, cook.

Our third sample again was off white and smelled slightly of caramel.  It tasted rather odd, distinctly of vanilla and sugar and at the same time, watery.  The feeling in the mouth was powdery and drying and the body was most definitely weak.  Turns out it was rice milk – vanilla is added as a flavouring to make it palatable.

Sample number four was pure white and glossy, almost reflective.  It smelled yeasty and had a very distinctive taste: slightly salty, caramel, coconut and most definitely GOAT.  The mouthfeel was not drying – it was quite neutral – however the caramel was an indication it might be being pasteurised at too high a temperature.  This often happens with all animal milks we consume ‘just to be on the safe side’. 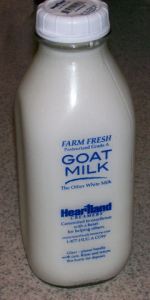 Sample five was cream in colour and smelled buttery.  It tasted very sugary, mineral and nutty.  It produced a definite drying sensation but was quite creamy.  This was soya milk which I normally find very difficult to actually swallow so it was a pleasant surprise – well as pleasant as soya milk can be which, frankly, isn’t very.

Finally we came to sample six.  It had a creamy white colour, barely any odour at all and tasted mineral, salty and slightly sour.  The sensation in the mouth afterwards was most definitely drying.  Jayne ‘fessed up.  This was milk with dilute hypochlorite solution in it.  That is, milk with bleach.  You may be wondering at this moment if it’s safe to drink milk with hypochlorite in it.  In fact it is.  Hypochlorite and bleach work by blasting open the cell walls of the organic matter they come into contact with.  In that process the solution however breaks down into its individual components which are salt, water and chlorine gas.  The gas escapes of course so all that is left is water and salt.  The milk therefore was completely safe and largely unaffected in flavour.  I described it as being a little more salty than our control sample but not everyone did. 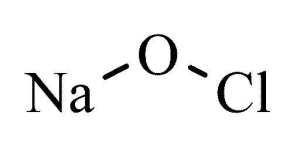 Just as we were about to ask Jayne, ‘If that’s the case with hypochlorite, how come you can end up with food that tastes a bit like bleach?’ she went on to say:

‘So hypochlorite in itself doesn’t taint, but you know sometimes when you make tea with chlorinated water, you get a bleach taste?  That is a reaction with the phenols in the tea.’

We’ve all, in our years of cheese tasting, encountered cheeses that tasted a bit chloriney.  This would likely be the same issue.  As the milk is broken down by its starters it releases phenols and flavour compounds.  Some of these can react with hypochlorite.

With our milk tasting over and a lot of information imparted, we had a go at ironing cheese and then stood up to help ourselves to lunch – a particularly tasty macaroni cheese Julie had hand crafted which was made all the more flirty by the addition of crispy bits of bacon and artichoke hearts.  Returning after lunch, we settled down to the serious work of grading sample of cheese brought by our fellow course attendees.  I didn’t get round all of them, but I happily made objective and descriptive notes on: St Jude (of course), Paul’s Little Anne & Dorothy, Jonny’s Baron Bigod (incredibly edible – in large amounts), David’s St Oswald (which I could also eat a lot of with alarming ease), Old Winchester, a lovely Gouda-esque cheese from Lyburn, David Holton’s experimental John Littlejohn and Innes Log.  Perhaps inevitably, however, given the quality of cheese on offer, assessments became less objective and more subjective.  We may have been writing descriptively but it was hard to stop the exclamations of ‘Wow that’s amazing!’ that seemed to crop up with every new cheese tasted.

Maybe, at heart, we’re all salesmen.