Over the summer we received planning permission for our build based on some preliminary plans.  I received the news by text somewhere in the Labirinto in the Dolomites (see above).  It was a rather good setting in which to receive good news and felt appropriately celebratory.

Of course we hadn’t really expected to get the go ahead quite that early and I was in Italy for another 6 weeks so our progress wasn’t as quick as perhaps it could have been all things considered.  We did, by dint of long distance phone calls to Alan Hayes of Capital Refrigeration who had expressed interest in building the interiors, manage to agree a basic interior layout and after a trip to Cheese in Piedmont and a rather informal meeting with Ivan Larcher by the side of the NYD stand, got confirmation that it would be appropriate for the volumes we intend to make and the types of cheese we intend to make. 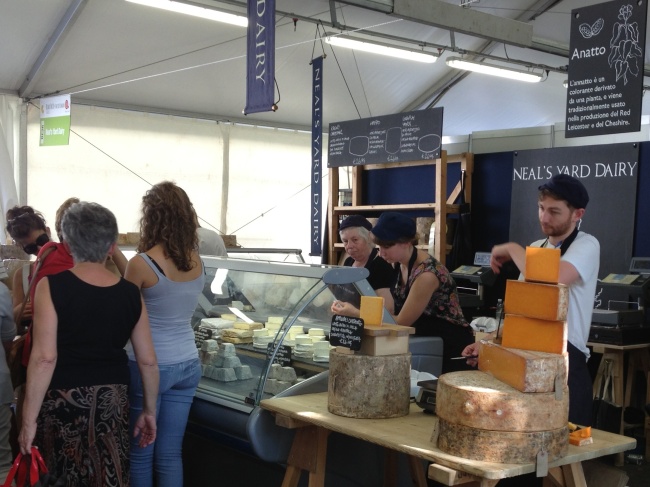 (Cutting edge Dairy design happened right next to this scene of cheese retail).

On my return to the UK and having managed to ascertain a date when Ivan would be in the UK, we arranged for him and Alan to meet and go through our final plans, sign off on them more or less and basically agree what we were planning to build in terms of its cost effectiveness and practicality.  We also met our future EHO who is all we could possibly wish for!  She freely admitted that she didn’t have experience of cheese but when Rose initially mentioned plans to make cheese and unpasteurised cheese at that, her employers put her on a course taught by Dr Paul Neaves so that she could learn more.  She was surprised to find that on this course, raw milk in and of itself wasn’t considered a problem and as long as we have good hygienic practices in work and hygiene is made practical and easy to achieve by the design of our building, she will be happy.  I was particularly impressed too that she had researched the Specialist Cheesemakers Association and was aware of current negotiations by the SCA’s Technical Committee to nominate a primary authority in Cornwall.  Primary authorities are a new(ish) idea, I believe, which are particularly useful for big companies with lots of different sites, like Arla or Dairycrest.  They nominate the authority at their head office or main manufacturing plant as their primary authority and this means that each site doesn’t have to deal with a different local authority as interpretations of the regulations is apparently extremely changeable from one borough to the next.  The SCA has used this as a template for themselves as an organisation so that all members of the SCA can deal direct with one authority.  The hope is that this will put an end to the issues individual members have had with one authority being unneccessarily obstructive with raw milk cheese producers due to half knowledge and perceived threats from its unpasteurised nature where one with more experience is a dream to work with and entirely co operative.  From the EHO’s point of view, as we learned when meeting ours, it’s a big relief too because it means that should there be a problem with a new business making a ‘dangerous’ raw milk cheese, the buck doesn’t stop with them.

From those meetings, things continue to move on.  Our barn is full of straw that the current tenant needs to move.  This hasn’t happened yet though I am assured that it will be doing so on either Wednesday or Thursday this week.  Once that happens a structural engineer will go in and assess what strengthening and repairs need to be done to the existing structure which has been up for a few years and may need a little bit of TLC to get it up to scratch for what we need it to do.  After that, accurate costs can be drawn up and following that, work can begin on the exteriors.  And when the walls go up outside, I will start to relax a bit.  Until then it’s weather dependent and we are of course entering winter.  Once the outside walls and roof are done, interior work can carry on regardless of the rain.  If everything runs to time (which we’ve been advised not to expect) we could start cheesemaking on April 8th.  However, as the advice from older and wiser heads is that it won’t run to time, we could hope to be up and running anywhere from May to September.  Another reason at this stage why I’ll relax a bit more when there are some walls there.  It will give a clearer idea of when I need to move house again and when I can get my hands in that curd!

Until then, however, I have Christmas Cheese Mongering to take my mind off things.  The next couple of weeks will see me, swaddled in so many layers of thermal clothing that I look like the Michelin man, behind the counter of the Mons Cheesemongers Borough Market Stall.

Can I switch my allegiance from Neal’s Yard Dairy British Cheese to the French stuff?  You bet I can. It’s in the family now!  Vacherin and Gruyere for Christmas anyone?