‘I see you have Bleu de Termignon,’ he said looking up and down the counter, ‘That’s very rare!  There’s only one producer.’

‘We’ve been selling cheese from two producers,’ I corrected, ‘We still have some of both on the display.  Most of the cheese is made by Catherine Richard and she tends to make a firmer, drier cheese but this piece here is all we have left of Bernard Richard’s cheeses and they tend to be softer and more broken down.’

He, was a french exporter who wanted also to import Cheddar and Stilton and to that end had just been in a meeting with Jay Butcher of Neal’s Yard Dairy.  Unfortunately for him, as Mons Cheesemongers, buys its french cheese exclusively from Mons in France, he wasn’t going to get a sale here.  However he took the news very well, was most impressed by the name of Herve Mons (‘He is very well known in France’ I was told) and proceeded to peruse the cheeses we had out to sell and try a few.

Bleu de Termignon is not an easy sell.  It looks scary.  It has entirely natural blueing – no mould powder is put into the milk and the cheeses aren’t even pierced.  It blues inwards from cracks in the rind and it looks in some way prehistoric.  It tastes extremely subtle though.  At its best, the blueing has fennel, liquorice notes and because the blueing only follows tiny cracks in the curd, it is very gentle and herbacious rather than having bigger pockets of blue which you get in most continental blue cheeses.  It’s made up in the Savoie in a ridiculously beautiful mountain valley and I can’t help feeling that it is a glimpse into a bygone age of cheesemaking.  Catherine Richard uses wooden moulds to drain her curd which must help those natural cultures of Penicillium roqueforti going in the environment and drains her curd overnight in great big bags before it is moulded.  In fact, there are many aspects of the recipe that are very close to Stilton.  It’s just interesting to note that Stilton has developed into a creamy textured cheese over the years (but in that not so far removed from Bernard Richard’s Termignans) where Bleu de Termignan even in its softer cheeses has more structure.  Again, this is purely supposition as I don’t know the cheeses, but Piedmont’s Castelmagno and Blu del Moncenisio (in its farmhouse versions), I feel must surely follow similar techniques as well or perhaps if they don’t any more, they must have developed the same way.  Blu del Moncenisio in particular is made on the Italian side of the mountain of Mont Cenis.  The Richards are just over the border on the French side. 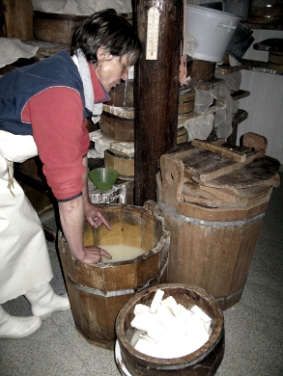 Termignan isn’t the only blue cheese on the Mons Cheesemongers counter however, we are also selling the much more crowd pleasing Persille de Beaujolais which is effectively a Fourme d’Ambert recipe but they use hemispherical Gorgonzola vats and buy their mould cultures from Italian Gorgonzola making friends.  This may or may not be Penicillium expansum / glaucum as discussed in a previous post but it certainly has a gentler and more mushroomy flavour than most savoury, herby roqueforti blueing.  Another example of how the AOC system isn’t the be all and end all when it comes to quality because this cheese is gentle and delicious and yet can not command the prestige of Fourme. 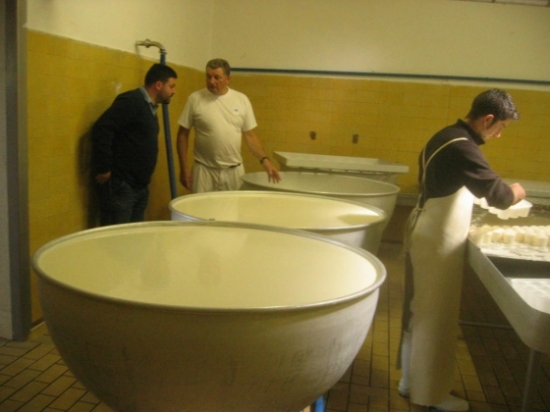 (Persille de Beaujolais being made in semi hemispherical Gorgonzola vats)

And as if there were a theme to these last two cheeses we come on to Persille de Malzieu.  This is Herve Mons’s Stichelton in effect.  It is Roquefort but more traditional than Roquefort.   Most Roquefort production is done on an industrial scale these days.  There are smaller producers and there are some extremely quality driven producers, but there are no longer farmhouse Roquefort producers.  Herve has persuaded a farmer just outside the AOC area for Roquefort cheese production but who had been selling their Lacaune sheeps milk for Roquefort production to make cheese with it.  They basically make a farmhouse Roquefort and rather than following the strict letter of the law for recipe as laid down by the AOC, they mature it at warmer temperatures and without it going into the famous caves.  They also seem to pierce it less.  In essence they are going back to some of the techniques that would have been employed in farmhouse Roquefort production without the access to big refrigerated cold rooms or the desire to deliver that big, salty strong blue hit that Roquefort has become known for.  In my opinion, it is delicious.  It has the caramel notes of sheeps milk with the herby notes of blueing.  That and the Bleu de Termignan are my favourite blue cheeses to sell.  Oh and it’s about two thirds the price of Roquefort too.  Without the AOC, it can’t command the same price.  Better cheese, less money.  I’m in!