On returning from Piedmont just under a month ago, I checked Facebook to see a post from Nicola about 2 new additions at Holker Farm.  While this could have been puppies, pigs or donkeys, I was fairly certain that it was the much anticipated Shorthorns.  I was right.

My first day back in the dairy was the first morning milking and they yielded us probably about 30 litres milk.  Since then they have settled happily in to their once a day milking regime and I’d say in the last week we’re getting nearer to 60 litres.  Nicola has been taking advice on their feed, switched the cake they get in the evening to a better quality and more nutritious one and given them a mineral lick all of which have contributed to them producing more milk but also milk with what seems like good solids.  Otherwise their diet is largely hay based and not particularly intensive.  They came in looking a little thin shortly after giving birth but are gaining condition and seem to be doing well on their once a day milking regime.  Not too taxing and yet yielding us plenty of milk and having now worked out a more regular size, we’re making roughly 10 cheeses weighing about 500g (probably) per day.

When I first started at Holker, Martin talked about how particular sheeps milk is and how once you get used to it, you’ll look at cows milk thinking, ‘What’s wrong with this milk’.  It has to be said I wasn’t entirely prepared for just how different the 2 milks would be.  The difference is (and was) perhaps heightened because the sheeps milk is end of lactation milk so the solids are huge – 8% fat and over 6% protein on one recent test.  The cows milk is early lactation and just naturally has much lower solids anyway than sheeps milk.  The first obvious difference however is the colour.  Cows milk is more yellow but at the same time more translucent, sheeps milk bright white and just standing until the end of the milking, there is a thin layer of yellow cream on top of the vat containing the cows milk.  The colour difference remains throughout the make as well, the whey is clearer and more yellow when cutting the cows milk, the sheeps milk whey, while a yellow colour is slightly thicker and whiter.

The texture is very different too.  In fact it was tricky working out when to cut the cows curd in the first couple of days because the set is much more delicate.  After a couple of days we felt it was going to naturally need more rennet than the sheeps milk and have managed to achieve a firmer set as a result.  However when looking for the ‘clean break’ when determining when to cut the curd, the set of the cows milk when it breaks cleanly is a lot more jelly-like than that of the sheeps milk which is dense and robust.

Drainage is hugely different too.  Whereas the St James needs regular cloth pulling and done pretty forcefully at that, the cows milk cheese (current working name Feallan from the Old English for Fall i.e. Autumn) needs cloth pulling largely much more gently and rather than forcing moisture out, you’re just trying your damndest to keep up with the natural drainage of the curd.  Where St James needs to sit overnight in its cloths with a follower on, by about 3pm Feallan has been turned once in its cloths and ready to be turned again and taken out of the cloths.  In future we’ll get followers to be put onto the Feallan too but for now, they just drain without pressure overnight which leads to slightly less reliable shapes but the drainage seems to happen ok.

As for maturing, well we have a couple of batches that we tried binding in spruce cambian (the leather textured layer below the bark that is used to bind Vacherin) which Martin set off into the Holker Estate to cut off trees in their timber stores.  More recent batches have been left to mature without and when we can compare and contrast the matured cheeses, we’ll get an idea of which tastes best.  Currently though, they are being washed a couple of times a week until they are roughly 2 weeks old by which time they have a reasonably convincing covering of B. linens and then they are being wrapped to continue maturing in paper.  Next Tuesday, Bronwen and David from Neal’s Yard Dairy will come and visit the farm and we will get a chance to try some of the older cheeses with them.  The cheeses will be about 5 weeks old by then and some of the oldest have a nice breakdown already.  It will be very interesting to hear what they think.

Like Loading...
One of the projects we’d hoped to attempt before my arrival was that with another person in the dairy we might get a chance to play around at making a cows milk cheese.  Martin has done this in the past with a cheese called Jewnywood (a St James recipe with cows milk basically) that was made using Friesian milk from a farm nearby with a small herd.  Unfortunately they are tied into a contract to supply liquid milk and can’t sell just the odd kit to a cheesemaker.  There are other farms in the area of course but ideally Martin hasn’t wanted to use Friesian-Holstein milk as it tends not to have the solids that you need for cheesemaking as crossing with Holsteins ups the milk production but also produces a more watery milk.  The ideal breed for this area is Dairy Shorthorns which were once ubiquitous and in the 18th century, I believe, Holker Estate had a renowned pedigree Shorthorn herd.  The farm opposite Holker Hall is still called Shorthorn Farm today.Currently the sheeps milk is decreasing.  We are half way through the season and the sheep that lambed early are beginning to dry up.  In August, the tups will go in with the ewes that are ready to get in lamb again and we’ll be looking to the next season already.  Time flies huh?  But from having had about 120 litres a day at the peak of the season we’re now down to about 80-90 and from making 17 or 18 cheeses to a batch we’re now at 11.  As the milk decreases, we’ve been thinking further about the whole idea of making a cows milk cheese and extending the season so that Martin & Nicola are selling cheese through the winter.  About 4 weeks ago when the Neal’s Yard Dairy crew visited, we floated the idea over our evening meal together to gage reaction.  The idea we proposed was to buy in local milk and make a soft washed rind cheese.  The idea had a mixed reception.  Bronwen and David who urge caution and not running before you can walk, were interested in the idea if the cheese was good but also conscious that buying in milk requires a level of testing and therefore expense that we don’t currently have because the sheep are milked by Nicola and the milk is super fresh when it’s used.  There’s a quantity issue too – there is a minimum amount you can buy milk in and Martin suggested that’s around 500 litres so it would need a bigger vat.  The evening ended, Martin talked a bit further to me after we left the NYD crew about the practicalities of buying in milk and how we might adapt our equipment to cope with it and then we parted ways.

The following day was my day off and by Thursday a newer idea had planted in the brain of Mr Gott.  Cows.  This seems like a rather radical idea when you first hear it but actually makes more sense at the end of the day than buying in milk.  They are already set up to milk animals and a milking parlour is not so hard to adapt.  They don’t need to buy more than 6 cows in order to have enough milk to be making the equivalent of peak sheeps milk season over the winter and these cows can be bought from a breeder, already in milk a couple at a time.  And finally, if it does all go wrong, the cows can be sold at pretty close to the amount for which they were bought while a new vat will depreciate and also could be difficult to shift too.

Of course the other bonus of buying the animals is that we can make cheese from Shorthorn milk too.  Why Shorthorn?  Because the older breeds of cow are better suited to the older ways of using milk – ie cheese.  Modern dairy farming assumes that the farmer wants to sell liquid milk and the more he (or she) can sell, the more he (or she) can earn.   So cows are bred to produce higher quantities of milk but at a cost.  There are higher incidences of fertility problems both getting in calf and delivering the calves and in birth deformities as well.  They are often taller but lean and rangy needing large quantities of food and in concentrated form in order to keep up with their milk production.  They can go lame a lot more easily.  In other words they are bred to be very specialised for the purpose of giving large quantities of milk.  For a farm like Martin & Nicola’s however they need a smaller animal that requires less veterinary attention and certainly less intensive feeding as their animals are largely pasture fed.  They also don’t need a lot of milk but do need milk with good solid content.  Again the older breeds score highest here too because the cows giving large volumes don’t give the highest fat and protein contents per litre so while the amount of milk is greater, the yield in terms of cheese doesn’t increase in the same ratio as production.

So Nicola and I went to the Great Yorkshire Show on Wednesday to look at livestock and see the sort of cows they’re likely to be buying.  Important for Nicola in particular as she’ll be doing the lion’s share of the milking and purely practically speaking, she can’t be milking a big animal.  I was largely along for a day out and out of curiosity and the chance to say hello to a few people I know there.  Meanwhile after having made the day’s cheese, Martin headed off to Kendal to a local Shorthorn breeder and found that there were cows available from August to November and that they could buy the smaller, plumper, docile and lower yielding animals they want.  On Saturday, they ordered the new milking parlour equipment to be able to milk 2 cows at a time through the parlour.  There’s no going back now! 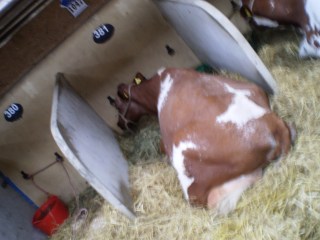 Shorthorn at the Great Yorkshire Show 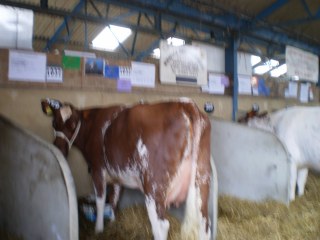 Somewhat blurry photo of a nice manageable sized Shorthorn.  The disadvantage of taking photos at speed.